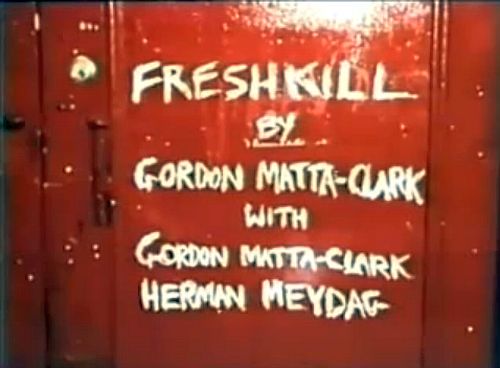 The realist sees only the front of a building, the outlines, a street, a tree. Marie Menken sees in them the motion of time and eye. She sees the motions of heart in a tree. … A rain that she sees, a tender rain, becomes the memory of all rains she ever saw; a garden that she sees becomes a memory of all gardens, all color, all perfume, all mid-summer and sun.

In his touching Village Voice obituary for Ms. Menken, who died in 1970 at 61 after a short illness, Jonas Mekas wrote: „There was a very lyrical soul behind that huge and very often sad bulk of a woman, and she put all that soul into her work. The bits of the songs that we used to sing together were about the flower garden, about a young girl tending her flower garden. Marie’s films were her flower garden. Whenever she was in her garden, she opened her soul, with all her secret wishes and dreams. They are all very colorful and sweet and perfect, and not too bulky, all made and tended with love, her little movies.“

What Mr. Mekas doesn’t mention is that the title subject in one of Ms. Menken’s earliest films, „Glimpse of the Garden“,belonged to one of her husband’s former male lovers. (This intimate connection might explain why the film is not titled „Glimpse of a Garden.“) There is something terribly moving about this biographical detail, which goes unmentioned in the documentary as well, because it suggests a generosity of soul — or, perhaps, more rightly, an insistence on life and self-affirmation — already evident in Ms. Menken’s images. Behind these delicate yet resilient, unmistakably feminized flowers, we intuit someone who could find beauty in the world, no matter how badly that world might have treated her. And not just find beauty, but also return it to the world, though on her own emphatic terms.

… the surrealist poet Charles Henry Ford …took me to a party that Marie Menken and her husband Willard Maas, underground filmmakers and poets, gave at their place in Brooklyn Heights at the foot of Montague Street.

Willard and Marie were the last of the great bohemians. They wrote and filmed and drank (their friends called them „scholarly drunks“) and they were involved with all the modern poets. Marie was one of the first to do a film with stop-time. She filmed lots of short movies, some with Willard, and she even did one on a day in my life. …

Later on I put her in a lot of my movies like Chelsea Girls and The Life of Juanita Castro. 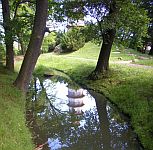 The interstellar roler-coaster ride of Powers of Ten does what the analogous sequence in 2011: A Space Odyssey should have: it gives the full impact – instinctual as well as cerebral – of contemporary scientific theories. … It popularizes (in the best sense of the word), post-Einsteinian thought the way the telescope popularized Copernicus; and the effect is almost as upsetting. The spectator is in perspectiveless space; there is no place where he can objectively judge another place. … the time-space traveler of Powers of Ten thinks of himself as a citizen of the universe, an unbounded territory. … Powers of Ten… concretizes a concept of the universe true to contemporary experience. And that ides is covetable.

Powers of Ten takes us on an adventure in magnitudes. Starting at a picnic by the lakeside in Chicago [Burnham Park], this famous film transports us to the outer edges of the universe. Every ten seconds we view the starting point from ten times farther out until our own galaxy is visible only as a speck of light among many others. Returning to Earth with breathtaking speed, we move inward- into the hand of the sleeping picnicker – with ten times more magnification every ten seconds. Our journey ends inside a proton of a carbon atom within a DNA molecule in a white blood cell.

The oblong patch of rough grass and strip of woodland where Thomas [David Hemmings] the fashion photographer inadvertently stumbled across canoodling lovers and a grisly murder are still there. The fence has disintegrated, but the wind still hisses through the trees just as it did in the haunting opening sequence of the cult movie Blow-Up, back in 1966.

Down some steep steps lie the tennis courts where the flower children – student extras recruited from nearby Goldsmiths College – acted out a silent game of tennis without a ball. But the simple plaque commemorating the filming in the summer of 1966 has been wrenched away.

Welcome to little-known Maryon Park, Charlton, location for Michelangelo Antonioni’s ground-breaking art-house film, whose fans arecelebrating its 40th anniversary. To mark the event, the Photographers‘ Gallery in London is staging an exhibition of rare images connected with the making of the movie.

robert nurden, ‚on the trail of the swinging sixties‚ in the independet

The All That Heaven Allows version of the May-September romance formula has [Jane] Wyman playing Cary, a well-to-do widow with two college-age children and a dull social life at the country club. The emptiness at the heart of her life is filled when she meets Ron Kirby [Rock Hudson], the young gardener-turned-tree farmer who prunes the trees that line her all-American suburban home – and then comes back to court her. This simple love story is disrupted by the vicious snobbery of her children and high society acquaintances.

laura mulvey, all that heaven allows